The long history of efforts to win national healthcare in the United States is, in the words of one scholar, "a drama in too many acts." Below is a timeline of national health reform efforts in Congress, which links to hundreds of pages of legislation, Congressional analysis, and public hearings. This timeline encompasses the complete transformation of medical care in the United States, the abolition of Jim Crow in the South, and the eventual birth of a social movement for single-payer healthcare.

Jump to a Time Period: 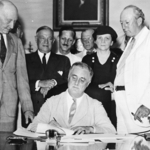 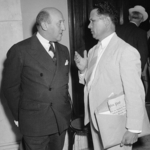 President of the AMA Lobbying Against the Wagner Bill

President Roosevelt convenes a National Health Conference in July 1938, out of which comes Senator Wagner's National Health Act of 1939, which provides for federal grants-in-aid to states for voluntary expansion of healthcare coverage and public health. The bill, considered on the eve of World War II, faces fierce opposition from the American Medical Association at Senate hearings, and fails to advance with the onset of war. 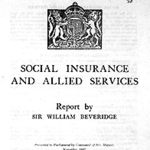 In 1942 the United Kingdom publishes the wildly popular "Beveridge Report," a government proposal to establish a welfare state, including a national health service. The author William Beveridge tours the U.S. in 1943, and his proposal for a broad program of social insurance is embodied in the Wagner-Murray-Dingell Bill, which proposes compulsory medical insurance for workers, as well as disability benefits, unemployment compensation, maternity benefits, and more. The bill's authors introduce it to start a conversation, but don't expect it to advance in Congress. 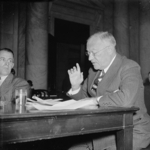 At the end of 1944 President Roosevelt finally instructs his administration to make a push for national health reform, but dies shortly thereafter in Apr. 1945. Harry Truman becomes President and delivers a Special Message to Congress calling for a Comprehensive Health Program on November 19. Senators Wagner and Murray and Rep. Dingell team up again to introduce the National Health Act, which would cover seniors, working residents, and their dependents through a national program, and provides separately via grants to states for the unemployed, mothers, and children. Major hearings are held by the Senate in 1946, which Republicans boycott. With poor prospects in the House, Sen. Murray shelves the bill for next session, but Republicans retake Congress in 1946, holding their own hearings from 1947-48 to attack Truman's healthcare plan as socialist during an election year. 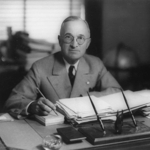 Act Two for President Truman and the Wagner-Murray-Dingell Bill

During the 1948 elections Truman campaigns on a national healthcare platform, and takes office with large Democratic majorities in both houses. Murray, Wagner, and Dingell revise their bill, re-filing it as the National Health Insurance and Public Health Act, which receives 15 days of public hearings by the Senate in 1949. The bill fails to gain support from Southern Democrats necessary for passage. 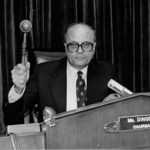 The Eisenhower Years and a Retreat from National Health Insurance

With Dwight Eisenhower serving as President from 1953 through 1961, and Republicans controlling both houses of Congress from 1955 through 1961, the prospects for a national health program diminish. However, upon the death of Rep. John Dingell Sr. in 1955, his son John Dingell wins a special election to take his seat and introduces the National Health Insurance Act in 1957 based on the legislation his father had filed in the 1940s, a bill he will introduce every session for 54 years through 2010. 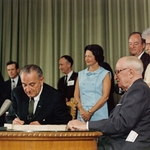 Growth of Private Health Insurance & Passage of Medicare and Medicaid

Employer-sponsored health insurance coverage grows rapidly through the 1950s and early 1960s, and both organized labor and Democratic leadership shift focus towards winning healthcare coverage for seniors and the low-income. In 1961 John F. Kennedy becomes President and Democrats win large majorities in both houses. The "Social Security Amendments of 1965," which include the Medicaid and Medicare programs, are signed into law on July 30th, 1965. 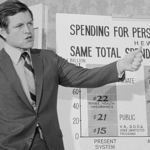 During the early 1970s runaway inflation leads President Nixon to impose wage and price controls across the economy, including healthcare services. A sense of inevitability pervades Congress that national health reform of some sort will pass. The primary legislative vehicle for single payer healthcare is Senator Ted Kennedy's Health Security Act. An alternate single-payer proposal is sponsored by Republican Senator Jacob Javits. These bills, along with competing proposals from President Nixon, the American Medical Association, and the American Hospital Association, receive extensive public hearings in 1971. These include Kennedy's "Health Care Crisis in America" hearings that tour around the country, as well as additional hearings in the House and the Senate. In 1974 Sen. Kennedy introduces compromise legislation that preserves a role for health insurers as intermediaries, losing support from unions in the process, but a deal with Nixon is derailed by Watergate and his resignation from office in August. When Gerald Ford succeeds to the Presidency, Rep. Mills attempts to move an even further compromised bill through House Ways & Means, but is unable to gain support from Republicans and Southern Democrats. 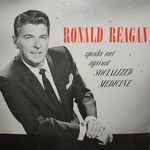 The Reagan Era and the Beginning of Grassroots Organization

Ronald Reagan, who in the 1960s had been recruited by the American Medical Association to attack national healthcare as socialist, serves as President from 1981 through the end of the decade. Reagan leads an assault on organized labor and the role of government in public life. No proposals for single-payer healthcare receive significant attention during this period. However, Physicians for a National Health Program is launched in 1986, and from 1988-1990 the bipartisan "Pepper Commission" in Congress develops a recommendation for universal healthcare that sets the stage for the next round of healthcare reform. 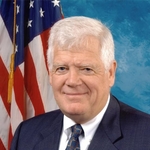 In early 1991 during the second term of George H.W. Bush, Representative Marty Russo introduces the Universal Health Care Act, which gains 72 co-sponsors - a record high for single-payer legislation in the House. Later in '91 Harris Wofford becomes the first Democrat in 23 years to win a Senate seat in Pennsylvania during a special election, closing a 44 percent polling gap by campaigning for national health insurance. Bill Clinton wins the 1992 Presidential elections promising to implement a universal healthcare plan, and while his Presidential Task Force on National Health Reform meets behind closed doors during 1993, Rep. Jim McDermott and Sen. Paul Wellstone introduce their single-payer proposal, the American Health Security Act with 90 co-sponsors in the House and 4 in the Senate. Clinton instead proposes his "Health Security Act" based on employer mandates, subsidies for the unemployed, and "managed competition," but the bill fails to advance through Committee. Democrats lose control of both houses of Congress for the next decade. 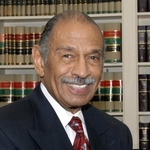 Growth of the Movement and Passage of the Affordable Care Act

George W. Bush serves as President from 2001-2008, but a network of grassroots organizations fighting for single-payer healthcare forms across the country during the 1990s and early 2000s. In 2003, Rep. John Conyers introduces the Expanded and Improved Medicare for All Act, H.R. 676, and Healthcare-NOW is launched in 2004 to advocate for it. For two sessions from 2005-2008, Senator Ted Kennedy and Rep. Dingell file a new national healthcare proposal, the Medicare for All Act. However, when Barack Obama is elected President in 2008 along with Democratic majorities in both houses of Congress, Democratic leadership keeps single-payer proposals off the table while debating and passing the Affordable Care Act from 2009 to 2010. 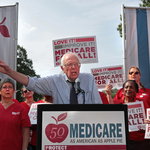 Sen. Bernie Sanders at a rally for Medicare-for-All.

Failure of the Right, Surge in Single-Payer Support

While the Affordable Care Act is not fully implemented until 2014, in 2011 Bernie Sanders introduces a Senate companion bill to the American Health Security Act, which Rep. McDermott had continued sponsoring in the House since 1993. In 2016 Donald Trump is elected President along with Republican majorities in both houses, promising to repeal the Affordable Care Act. National opposition not only prevents the GOP "repeal and replace" effort, but leads to a surge in support for single-payer healthcare. By 2017 Rep. Conyers's Expanded and Improved Medicare for All Act hits an historic high of 120 co-sponsors in the House, and Sen. Bernie Sanders introduces a new single-payer bill, the Medicare-for-All Act with 16 co-sponsors in the Senate.

This page supported by the Healthcare-NOW Education Fund