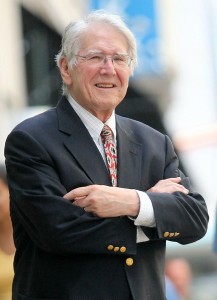 Dr. Quentin Young, one of the most extraordinary leaders in our movement and a founding member of both Physicians for a National Health Program and Healthcare-NOW, died on March 7, 2016, surrounded by family, at the age of 92.

Dr. Young was a founding member of the Committee to End Racial Discrimination in Chicago Medical Institutions (or CED), which during the 1950s fought for integration of hospitals and awarding staff privileges to black physicians. The CED evolved into the Chicago branch of the Medical Committee for Human Rights (MCHR), the medical arm of the civil rights movement, about which John Dittmer has written an extraordinary history: The Good Doctors.

Dr. Young was a medical volunteer for the Mississippi Freedom Project in 1964, and served as the national chairman of the MCHR from 1967-1968. In addition to their anti-segregation and -discrimination work in the north, MCHR organized medical professionals to provide free healthcare for civil rights activists putting their health and lives on the line at rallies and actions across the South.

In 1968 Quentin was summoned before the notorious House Un-American Activities Committee, which was trying to connect the Medical Committee to the Communist Party. A friend of Dr. Young’s has posted his HUAC testimony online – he refused to answer whether he was a communist, and repeated his belief that HUAC’s activities were unconstitutional.

Dr. Young served as President of the American Public Health Association in 1998; was the private physician of Barack Obama and Studs Terkel; and cared for Dr. Martin Luther King when he was injured by thrown rocks during a Chicago march. Dr. Young two years ago published an extraordinary autobiography, Everybody In, Nobody Out: Memoirs of a Rebel Without a Pause, and a documentary of Dr. Young’s life – The Good Doctor Young – is currently under production. I’d encourage you to read the moving statement by PNHP in memory of Dr. Young.

Dr. Young, like Healthcare-NOW’s founder Marilyn Clement, was one of the living bridges who built the single-payer movement from the people and institutions created by the civil rights movement.

At Healthcare-NOW, we hope to honor Quentin’s memory by redoubling our organizing efforts until everybody is in, and nobody is left out of our healthcare system. I hope you’ll join us.