THE CLAIM: SINGLE PAYER IS A JOB KILLER 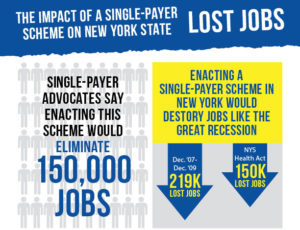 A graphic from an opposition group warning that 150,000 jobs will be lost in New York if the state single payer bill, the New York Health Act, is passed. It fails to mention that the study cited projects a net gain of 155,00 jobs!

The truth: In addition to creating a net gain of jobs, single-payer will improve the lives, choices, and working conditions of all workers.

A single payer system is ultimately pro-worker. By untethering insurance from employment, employers don't have as much power over employees. More opportunities will open up for those who would like to change jobs, start a new business, or not work at all.

Numerous studies show that Medicare for All will result in a net gain of jobs. By shifting the burden of cost from employers to a progressive tax scheme, businesses will save money and can more easily hire. More money will stay in the pockets of lower and middle-income earners, boosting the economy and demand. A 2015 study of New York’s single payer proposal have estimated that 200,000 jobs would be created by the economic effects of the state’s single payer proposal, the New York Health Act (NYHA). Even the more centrist RAND corp. found that the NYHA would result in a net gain of over 155,000 jobs in 2022. Studies of single payer in Vermont and Oregon also show a net gain.

In addition to boosting the economy, many well-paying jobs in healthcare delivery will be created to meet new demand for services. More people insured will result in more work for all healthcare workers - many of whom can now practice medicine rather than dealing with insurance.

These numbers address the long term effects of single payer on the workforce. Nonetheless, single payer's vast increase in administrative efficiency and the elimination of private insurance will affect hundreds of thousands of jobs in insurance companies, doctors' offices, hospitals and other healthcare facilities.  Those workers have legitimate concerns about how the transition to Medicare for All will affect their lives and livelihoods. We address those concerns here.