Grassroots organizations rarely have the kinds of power, such as money or influence, that can be exercised behind closed doors. This training will teach you how to exercise the type of power you do have to take public actions to move your legislators.

Moving a resistant legislator with grassroots muscle requires mobilizing a network of community activists and/or a coalition of organizations with grassroots bases, a strategy rooted in an analysis of power, and a plan to execute escalating tactics that will end in taking public actions.

In order to be effective, these actions must take advantage of the power you have built through community organization and coalition-building.

First you’re going to get the lay of the land – who are your legislators, and where do they stand on the issue of single payer healthcare? You’ll end up choosing one legislator – your priority target – who will be the focus of the rest of this campaign.

The first step is to develop a scoring system for your legislative delegation. Scores will range from hostility all the way up to leadership. Not only should your score be based on your legislator’s existing stance on the issue, but the score must be based on a measurable act you can ask your legislator to do.

It helps if there’s a measurable stepping stone between neutrality and co-sponsorship of a bill (such as supporting intermediate legislation, or voting on an amendment) – but again, it must be an act you can ask the legislator to do.

Step 1: Download the Legislative Scoring System Worksheet here. If you’re working on H.R. 676 or the Senate bill, you may find it easiest to use the sample score that have been provided: 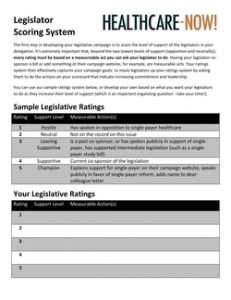 Step 2: When you have settled on a scoring system (or decided to use ours), the next step is to score your legislative delegation and make some notes about your and your activists’ interactions with them.

Don’t forget about legislators after they have signed onto your bill: have a clear pathway for supportive legislators to take on greater leadership to help the movement. 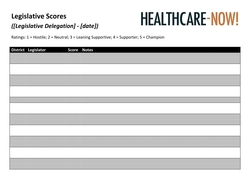 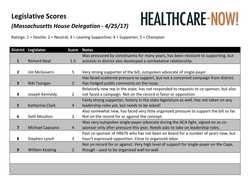 Now that you’ve scored all your legislators, choose a target. If you’re just organizing a district and have only one rep, this might be easy. If you’re coordinating a state campaign, you’ll need to do a separate power map for each legislator/target. Go for the easiest targets first.

The next step is to map the power relationships between you and your legislator, which will be the basis for developing a campaign to increase your leverage and use the power you build to move your legislator. The power map will help you decide which potential allies to bring on board your campaign. 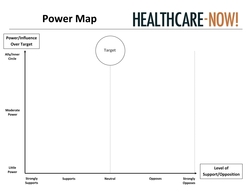 A power map is an old organizing tool: fill in your target’s name (the legislator) at the top in the middle, then place all organizations and individuals on the map who might exercise (or already have exercised) influence over the legislator on this issue. The greater the power/influence they have over this particular legislator on this particular issue, the higher (vertically) you place them on the map; the more supportive of your issue they are, the further to the left you place them – and the more hostile they are, the further to the right (horizontally).

Start with your group and your closest allies, and work your way out to individuals and organizations who are occasional or potential allies. Then work out from your legislator, mapping their relationships that are relevant to this issue – including donors; any groups the legislator has been linked to that might care about healthcare; and any key political institutions or individuals in their district. Finally, make sure to include the opposition: all the groups and individuals likely to oppose your bill, and how close they are to the legislator on this issue.

Download an example Power Map (from the Massachusetts Case Study): 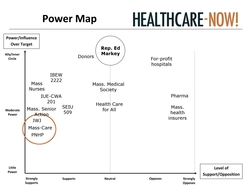 Step #3: Develop a Campaign of Escalating Grassroots Tactics to Move Your Legislator

If your coalition has enough power to move the legislator when fully activated then it’s time to develop a campaign of escalating tactics that you have the resources and staff/volunteer time to carry out. Continue Step #3!

If your coalition will not have enough power to move the legislator when fully activated, you are looking at a longer-term campaign in which you and your allies will first want to win the support of intermediate targets, who do have the power to move your legislator (and you’ll have to make a separate power map to move them!). Go back to Step #2. 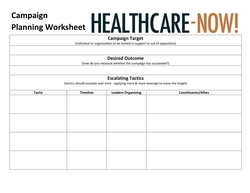 Moving to public action as part of a legislative strategy is challenging because it is resource intensive, and many organizations don’t have the capacity to execute the more resource-intensive tactics in more than a few districts at a time. It is also challenging because it can involve applying public pressure to an official you wish to become an ally – elected officials do not like being organized against, so activists need to be extraordinarily careful to maintain cordial private and public messaging, even while escalating their tactics and using the grassroots power they have. Because of this, it’s ideal to include long-time supporters of the legislator in the coalition, and to avoid developing an oppositional relationship, which will guarantee failure.

Here are some guidelines for choosing the tactics that will make up your campaign:

Between 2006 and 2009, a coalition of individuals, unions, and community organizations in Massachusetts ran a successful multi-year campaign to win the support of Representative Ed Markey (who is now a Senator) for HR 676, the Expanded & Improved Medicare for All Act.

Legislative Score: Rep. Markey scored “Leaning Supportive,” as he was a former co-sponsor of single-payer legislation submitted by Paul Wellstone, and because he had privately expressed support for the concept of single-payer healthcare reform. The goal of the campaign was to move Rep. Markey to become a “Supporter” by co-sponsoring HR676, which he had resisted doing.

Power Map: The campaign was led by Mass-Care and Jobs with Justice, and a power map of the district shows that a number of allied unions and community organizations had strong membership bases in Rep. Markey’s district and, in a couple of cases, good relationships with Rep. Markey.

Download the Power Map from the Massachusetts Case Study:

Campaign Plan and Outcomes: Mass-Care and Jobs with Justice reached out to the unions and organizations identified on the power map and developed a campaign of escalating tactics.

Download the Campaign Plan from the Massachusetts Case Study: 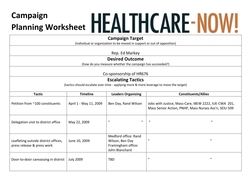