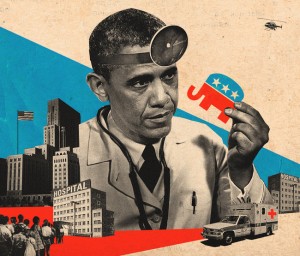 By J. D. Kleinke for the New York Times –

If Mitt Romney’s pivots on President’s Obama’s health care reform act have accelerated to a blur — from repealing on Day 1, to preserving this or that piece, to punting the decision to the states — it is for an odd reason buried beneath two and a half years of Republican political condemnations: the architecture of the Affordable Care Act is based on conservative, not liberal, ideas about individual responsibility and the power of market forces.

This fundamental ideological paradox, drowned out by partisan shouting since before the plan’s passage in 2010, explains why Obamacare has only lukewarm support from many liberals, who wanted a real, not imagined, “government takeover of health care.” It explains why Republicans have been unable since its passage to come up with anything better. And it explains why the law is nearly identical in design to the legislation Mr. Romney passed in Massachusetts while governor.

The core drivers of the health care act are market principles formulated by conservative economists, designed to correct structural flaws in our health insurance system — principles originally embraced by Republicans as a market alternative to the Clinton plan in the early 1990s. The president’s program extends the current health care system — mostly employer-based coverage, administered by commercial health insurers, with care delivered by fee-for-service doctors and hospitals — by removing the biggest obstacles to that system’s functioning like a competitive marketplace.

Chief among these obstacles are market limitations imposed by the problematic nature of health insurance, which requires that younger, healthier people subsidize older, sicker ones. Because such participation is often expensive and always voluntary, millions have simply opted out, a risky bet emboldened by the 24/7 presence of the heavily subsidized emergency room down the street. The health care law forcibly repatriates these gamblers, along with those who cannot afford to participate in a market that ultimately cross-subsidizes their medical misfortunes anyway, when they get sick and show up in that E.R. And it outlaws discrimination against those who want to participate but cannot because of their medical histories. Put aside the considerable legislative detritus of the act, and its aim is clear: to rationalize a dysfunctional health insurance marketplace.

This explains why the health insurance industry has been quietly supporting the plan all along. It levels the playing field and expands the potential market by tens of millions of new customers.

The rationalization and extension of the current market is financed by the other linchpin of the law: the mandate that we all carry health insurance, an idea forged not by liberal social engineers at the Brookings Institution but by conservative economists at the Heritage Foundation. The individual mandate recognizes that millions of Americans who could buy health insurance choose not to, because it requires trading away today’s wants for tomorrow’s needs. The mandate is about personal responsibility — a hallmark of conservative thought.

IN the partisan war sparked by the 2008 election, Republicans conveniently forgot that this was something many of them had supported for years. The only thing wrong with the mandate? Mr. Obama also thought it was a good idea.

The same goes for health insurance exchanges, another idea formulated by conservatives and supported by Republican governors and legislators across the country for years. An exchange is as pro-market a mechanism as they come: free up buyers and sellers, standardize the products, add pricing transparency, and watch what happens. Market Economics 101.

In the shouting match over the health care law, most have somehow missed another of its obvious virtues: it enshrines accountability — yes, another conservative idea. Under today’s system, most health insurers (and providers) are accountable to the wrong people, often for the wrong reasons, with the needs of patients coming last. With the transparency, mobility and choice of the exchanges, businesses and individuals can decide for themselves which insurers (and, embedded in their networks, which providers) deserve their dollars. They can see, thanks to the often derided benefits standardization of the reform act, what they are actually buying. They can shop around. And businesses are free to decide that they are better off opting out, paying into funds that subsidize individuals’ coverage and letting their employees do their own shopping, with what is, in essence, their own compensation, relocated to the exchanges.

Back when the idea of letting businesses and consumers pick their own plans — with their own money on an exchange — first floated around Washington, advocates called them “association health plans.” They, too, would have corrected for the lack of transparency, mobility and choice in local insurance markets by allowing the purchase of health insurance across state lines. They were the cornerstone of what would have been the Bush administration’s reform plan (had the administration not been distracted by other matters). After the rejection of “Hillarycare” in the mid-’90s, association health plans emerged as the centerpiece of pro-market, Republican thinking about health reform — essentially what would become Romneycare, extended via federal law to cover the entire country. So much for Mr. Romney’s argument that his plan in Massachusetts was an expression of states’ rights. His own party had bigger plans for the rest of the country, and they looked a lot like Obamacare.

But perhaps the clearest indication of the conservative economic values underlying the act is its reception by many Democrats. The plan has few champions on the left precisely because it is not a government takeover of health care. It is not a single-payer system, nor “Medicare for all”; it does not include a “public option,” a health plan offered by a federal insurer. It is a ratification of market ideas, modified to address problems unique to health insurance.

Mr. Obama’s plan, which should be a darling of the right for these principles, was abandoned not for its content, but rather for politics. Neither side is blameless here. The White House could not have been more ham-fisted in the way it rammed the bill through Congress. The Republicans in the House and Senate lashed back with a vengeance, sifting through the legislative colossus for boogeymen like “death panels,” and when they could not find things sufficiently alarmist, they simply invented them.

Clear away all the demagogy and scare tactics, and Obamacare is, at its core, Romneycare across state lines. But today’s Republicans dare not own anything built on principles of economic conservatism, if it also protects one of the four horsemen of the social conservatives’ apocalypse: coverage for the full spectrum of women’s reproductive health, from birth control to abortion.

Social conservatives’ hostility to the health care act is a natural corollary to their broader agenda of controlling women’s bodies. These are not the objections of traditional “conservatives,” but of agitators for prying, invasive government — the very things they project, erroneously, onto the workings of the president’s plan. Decrying the legislation for interfering in the doctor-patient relationship, while seeking to pass grossly intrusive laws involving the OB-GYN-patient relationship, is one of the more bizarre disconnects in American politics.

Obamacare draws fire from this segment of “conservatives” because it fortifies the other side in their holy war. Coverage for birth control and abortion has not been introduced by the law; but it has been neutralized economically across all health plans, as part of the plan’s systemic effort to streamline fragmented health insurance markets and coverage.

The real problem with the health care plan — for Mr. Romney and the Republicans in general — is that political credit for it goes to Mr. Obama. Now, Mr. Romney is in a terrible fix trying to spin his way out of this paradox and tear down something he knows is right — something for which he ought to be taking great political credit of his own.

J.D. Kleinke is a resident fellow at the American Enterprise Institute, a former health care executive and the author of the novel “Catching Babies.”