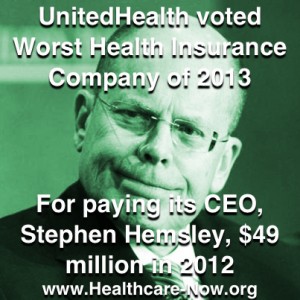 The 2013 Award for Profiteering and Deceit in the Private Health Insurance Industry goes to… UnitedHealth for paying its CEO, Stephen Hemsley, $49 million in 2012.

We want to thank everyone who participated. We’re planning to send the award to UnitedHealth’s world headquarters in Minneapolis, MN soon. We’ll also include all of the reasons you gave us about why they are the worst. Including:

“They never approve anything needed by the patients. They have made the process so cumbersome to jump through for authorization that it is impossible for physician to get appropriate treatment for patients. That is how they make their money is by denying appropriate coverage of their enrollees.”

The results:
37% – UnitedHealth
30% – Humana for charging women over 50% more than men for the same insurance plan.
27% – Anthem Blue Cross for predatory premium increases.
6% – Moda Health for paying $40 million for naming rights to the Portland Trailblazers arena.

Among CEOs, healthcare CEOs receive the highest median pay at $11.1 million. There are thousands of insurance companies, but the seven largest publicly traded health plans alone are paid their CEOs a collective $87 million.

Under a single-payer health plan, health coverage would be offered as a public good to all, administered by civil servants who will not siphon millions of dollars meant for patient care into their personal bank accounts. So we could use that $87 million in wasted money on CEOs to pay for as many as 8,700 hip replacements.