By Tom Eblen for the Lexington Herald-Leader – 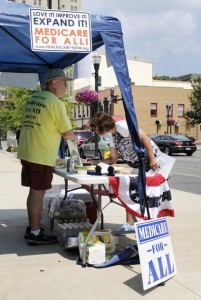 Bill Mahan set up a tent beside Phoenix Park last Monday to gather signatures supporting legislation to make Medicare available to all.

Medicare turned 47 years old last Monday. Bill Mahan celebrated by setting up a booth on Main Street to try to convince passersby that America’s health insurance crisis could be eased considerably if everyone had Medicare.

The Lexington retiree collected about 125 signatures for his petition. It asks members of Congress to support proposed legislation that would strengthen Medicare, which now covers more than 47 million seniors and disabled people, and make it the vehicle for providing basic universal health insurance coverage.

“I’ve heard so many stories, it’s just unbelievable,” said Mahan, 68, who went on Medicare three years ago. “I don’t know what to tell these people.”

What Mahan mostly tells them is that these problems are likely to continue until the United States has a single-payer health insurance system.

Under proposed single-payer systems, private doctors and hospitals would provide health care services, but the government would pay the cost from tax revenue. It is the system used in Canada and most European countries, which the World Heath Organization says offers better care for less cost than the United States does.

When President Barack Obama and a Democratic-controlled Congress pushed through health care reform legislation in 2010, a single-payer system wasn’t even considered. That was because of opposition from insurance companies, which wouldn’t even allow a “public option” choice.

Instead, we ended up with reform legislation that will cover more people and outlaw the worst insurance industry abuses but still will leave an estimated 23 million people uninsured and do too little to curb rising costs.

Republicans have vowed to repeal “Obamacare” but have proposed no adequate alternatives. Senate Republican Leader Mitch McConnell of Kentucky complains that Obama’s health care law is “Europeanizing” America, but he fails to mention that those European systems provide high-quality, universal care with much less administrative cost and hassle.

The most radical GOP plan, proposed by Rep. Paul Ryan of Wisconsin and endorsed by many Republican leaders, essentially would privatize Medicare. But an independent analysis by the non-partisan Congressional Budget Office found that Ryan’s plan, rather than reducing costs, would increase them dramatically, including almost doubling seniors’ out-of-pocket expenses.

Ironically, Obama’s reform law was based on market concepts developed by the conservative Heritage Foundation. Republican presidential candidate Mitt Romney created a similar — and rather successful — health insurance system for Massachusetts when he was governor.

Single-payer advocates say “Obamacare” is better than what we had, but it just further subsidizes private insurance companies. It reinforces our current system’s fatal flaw: the inherent conflict between businesses trying to make as much money as possible and society’s need to provide basic health care to everyone at an affordable cost.

Improving and expanding Medicare would require tax increases, but single-payer advocates think that, on balance, they would amount to far less than we now pay for private insurance that costs more and covers less with each passing year. That has been the experience in countries with single-payer systems.

House Resolution 676, introduced by Rep. John Conyers, D-Mich., to create a single-payer system, has been endorsed by dozens of consumer groups, church denominations and organizations representing thousands of physicians and other health professionals. Advocacy groups include Kentuckians for Single Payer Healthcare (Kyhealthcare.org), Improved Medicare for All (Medicareforall.org) and Physicians for a National Health Program (Pnhp.org).

But without public pressure, the legislation is unlikely to get a fair hearing in the Republican-controlled House of Representatives or the Democratic-controlled Senate. The health insurance industry is just too powerful.

During Romney’s recent overseas campaign trip, the Republican presidential candidate praised Israel for having a healthy population while spending only 8 percent of gross domestic product on health care, compared to 18 percent in the United States.

How does Israel do it? Since 1995, the Jewish state has had a non-profit insurance system heavily controlled by the government that provides basic health care for everyone. Imagine that.

Posted in Single-Payer News and tagged ACA, medicare for all, Single-Payer, universal healthcare