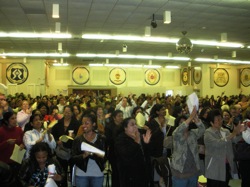 After 28 days on strike, the members of PASNAP, the union that represents 1500 nurses, professionals and technical employees at Temple University Hospital, voted overwhelmingly to accept the new contract agreements. After three ratification votes held throughout the day, the total members voting was 1075 with 97% in favor.

“Temple provoked this strike in an effort to weaken our unions and eliminate our right to speak out for our patients. What they got instead was an emboldened, stronger union membership that will continue to work under a contract with some of the best working conditions and benefits in Philadelphia,” said Jackie Silver, MSW. “We are proud that we reached a resolution and that we will be able to continue to fight for our patients, our rights, and our professions.”

Most of the elements of the hospital’s “best and final” offer were withdrawn in the final agreement. The notorious “gag clause” was taken away, preserving the employees’ right to engage in public advocacy. In addition, provisions that were intended to weaken the two unions were removed, including Temple’s proposals to eliminate “union shop” and to separate the RN and professional/technical unions’ shared contract expiration date. The employees’ dependent tuition benefit, which Temple illegally discontinued last spring, will be restored for the employees for up to 6 credits per semester during the life of the contract, despite assertions by Temple management that they would no longer provide any dependent tuition benefit. This benefit will actually be extended to all Temple Health System employees, not just PASNAP-represented employees, which is a major victory for all employees in the system.

“They knew we would not take their ‘best and final’ offer, but they underestimated the strength of our membership. Their plan to weaken us did not work. Instead, we became more united in this strike, and we will return to work with a great amount of pride in what we achieved,” said Maureen May, RN, president of the nurses’ union. “I am very proud of our contract and of our negotiating team.”

At the ratification meeting, Bill Cruice, Executive Director of PASNAP, held up a copy of Temple’s “best and final” offer and compared it side by side with the new tentative agreement. “Temple’s proposed unacceptable conditions would be in our contract today if we had not stood together to resist their effort to weaken our union,” Cruice said. “With this contract, nurses, professional and technical employees continue to have the best overall conditions in the Philadelphia. The contract is a testament to the strength of our union and the commitment of our 1500 members at Temple.”