New York, NY – Citizens and health care providers today staged a sit-in at the offices of Aetna, one of the nation’s largest health insurance companies, in New York City (99 Park Ave @ 40th). The action is part of a national mobilization to end health insurance abuses such as the denial of coverage for lifesaving treatments, and win support for the only real public option – Medicare for all, a single payer plan. The action was part of a Mobilization for Health Care for All campaign that includes actions in Chicago, Los Angeles, and other cities across the country. 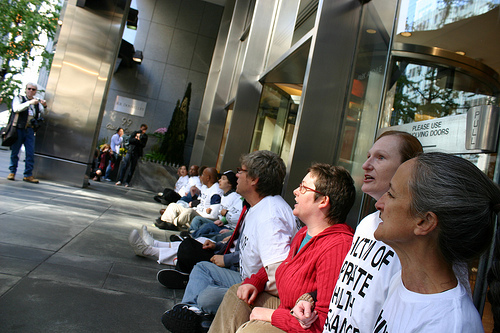 The 17 participants, wearing T-shirts with slogans that read “Medicare for All” and chanting “patients, not profits!” linked arms and sat down in the lobby of the Aetna building, prompting Aetna employees to step around them on their way into their offices, where insurance claim reviewers are busy looking for ways to deny people the lifesaving treatment that they need. A crowd of supporters picketing outside the building held signs that said “Aetna is the real death panel,” and “Single payer now.”

Participants in the action demanded that the insurance company immediately approve all doctor-recommended lifesaving treatments in their files, stating that they would not leave until Aetna approved care. Aetna, however, refused to meet with their representative.

“Insurance companies are denying care to people who need it right and left, but that’s not how it should work. Health care is a right, not a privilege,” said Constancia ‘Dinky’ Romily, 68, just before getting arrested. Romily is a retired nurse and a resident of East Village, New York. “I’m putting myself on the line and getting arrested to end insurance abuse and win health care for all,” she says.

The sit-in is part of the Patients Not Profit campaign of the Mobilization for Health Care for All. The mobilization was launched by the organizations Prosperity Agenda, Health Care NOW!, and the Center for the Working Poor. Today’s action has been organized by the Private Health Insurance Must Go coalition, a local New York organization.

Laurie Wen, 38, a Manhattan resident, is one of the everyday Americans who are fed up with the state of health care in our country, and was arrested today to stand up for the hundreds of Americans who are denied lifesaving care every day, and to call for the only solution for health care for all, Medicare for all. A friend of hers, she says, was recently denied by Aetna for coverage for a bone marrow transfusion to treat cancer for three months, setting his care back for three months.

“We will continue to stage these sit-ins as Congress debates legislation that expands the insurance company stranglehold over our health, our lives, and our government,” says Wen. “We need a better system to end insurance abuse and win health care for all.”