By David Gorn for California Healthline –

Only in San Francisco can a guy wearing a rainbow rasta wig be a voice of reason.

But there he was, among an estimated 400 boisterous protesters, trying to keep the sidewalk clear so pedestrians could pass through the colorful event. Event organizer Don Bechler also was busy keeping the gathering legal and peaceful. 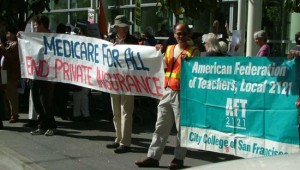 “America deserves a health care system that’s not broken,” said Bechler, chair of California-based Single Payer Now. “We want to get rid of the insurance companies and their bureaucracy of denial. It’s crazy that doctors need to spend so much time dealing with insurance companies — that’s madness to deal with that kind of bureaucracy.”

Health care providers, labor groups and single-payer advocates turned out on the street outside of the annual convention of America’s Health Insurance Plans, a national trade group of health insurers.

Outside, protesters chanted, speakers orated, a pair of giant puppets battled each other (nominally an American citizen taking on insurance groups, but you really had to use your imagination) — and at one point the crowd was treated to the singing of a well-dressed group of ladies who called themselves the Raging Grannies of the Peninsula. They held signs reading “Survival of the Richest” and “Let Them Eat Advil.”

“I see it all the time, insurers turning down health claims left and right. You see that they’re more worried about profits than patients,” Roberts said. “I have stories and stories, I could go on for days.”

National health care reform is a start, Roberts said, but he’s hoping to one day see the end of health insurance companies altogether. “It’s too much,” he said. “Too much profit, too much paperwork, too many people not getting the care they need. The insurance companies are fleecing us, that’s just so clear.”

Organizers estimated the crowd at about 400 people. San Francisco police reported no complaints.