The single-payer and labor movements lost a hero last week on October 19 when Jerry Tucker passed away. He co-founded the Labor Campaign for Single Payer Health Care along with Healthcare-NOW! Steering Committee member Mark Dudzic.

By Mark Dudzic for Labor Notes – 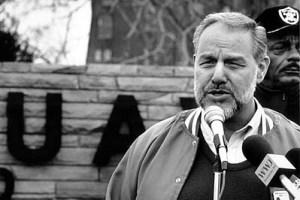 The scenario went like this: First they insulted you by demanding massive concessions. Then they refused to bargain in good faith. Then they provoked you into striking. Then they used the courts and the NLRB to run scabs through the lines, transfer work to other plants, or permanently shut down.

The results were grimly predictable. You either lost your job in a plant closing or to a “permanent replacement,” or you crawled back to work on the bosses’ terms.

Sounds pretty standard today, but in the mid-1980s it was downright shocking. Nothing in the previous 30 years of labor relations had prepared us for the ferocity of the attacks. The labor movement was completely disoriented.

Out of this chaos arose a consensus from national leaders. “If you can’t beat them, join them,” they told us. “We’ll never be able to win another strike, so our only hope is to cooperate with the bosses in advance. We can ameliorate the worst of their concessions and head off their union-busting by becoming junior partners on the shop floor and showing them the value of cooperation.” The United Auto Workers (UAW), once the standard-setter for wages, benefits and conditions for the whole working class, pioneered this approach.

Those of us who wanted to fight back felt helpless. The tactics honed in easier times—the wildcat strike, militant shop-floor resistance, a strategic strike against a single plant—were worse than useless against a determined union-busting employer. The bosses actually counted on these types of responses. They were part of their game plan.

Along came a guy named Jerry Tucker. “Don’t let the bastards provoke you into striking!” he counseled. “Stay inside. Learn to ‘run the plant backwards.’ Trust the knowledge and ingenuity of the rank and file to figure out how to make the plant ungovernable while mobilizing new forces and new allies to support you at the bargaining table.”

Jerry Tucker made his bones in the Moog Automotive campaign in 1981 where he led an “inside game” to win a decent contract for 1,200 workers. For those of us looking for a way to fight back, his methods were like a light in the darkness. I first read about Jerry’s inside game in a booklet published by the AFL-CIO Industrial Union Department in 1985. It was incredibly empowering.

Over the years, hundreds of activists contacted Jerry for advice and support. Jerry patiently worked with each one to help them understand how to build power strategically to win their fight. This was truly his life’s work. He believed that change could only be driven by leaders organically connected to an educated and mobilized rank and file.

Jerry actively sought out those leaders. They were people like UAW activist Gregg Shotwell, who met Jerry in 2003. “Jerry never told me what to do,” remarks Shotwell, “but after talking with him I felt I knew what I had to do next. That’s the gift of a true organizer.”

Jerry’s fightback vision soon came into conflict with the leadership caucus of the UAW, which was consolidating around a partnership with the Big Three auto companies. He was a respected staffer and could have easily made his peace with the administration, but he did not go softly into the good night. In 1986 he ran against the administration and won election as a regional director (although it took a court order to finally get him installed)—something almost unprecedented in the history of the UAW. He helped to found the UAW’s New Directions Movement, a group that catalyzed a rank-and-file resistance movement in the late 1980s and early 1990s.

Purged from the UAW, Jerry devoted his life to working with the “lost battalions” of the labor movement in their fights against concessions and union-busting. In the 1990s, his work with the Staley workers in Decatur, Illinois (at $100 a day—including expenses!) was a textbook case of how to run a strategic campaign. Their multi-year fight helped many in labor to conclude that a “new direction” was indeed necessary and helped spark a mid-1990s labor upsurge that launched a Labor Party movement and elected new leadership to the AFL-CIO.

Jerry’s belief in militant and democratic unions led to his long relationship with Labor Notes. He spoke at its conferences and was on its board for a time. He viewed it as one of the few institutions that could bring together the “best and the brightest” of the labor movement and was always on the lookout for the new organizing models and smart, committed activists who gravitated to Labor Notes events.

His emphasis on the need for education led him to found Solidarity Schools. He thought that worker education primarily consisted in helping workers draw conclusions from what they already knew about their world and weaving those conclusions into a strategic perspective. He never forgot to listen and learn from others’ experiences.

Jerry had a visceral understanding of how racism, sexism, homophobia, and anti-immigrant prejudice divided the working class against itself. In everything he did, he insisted that the organizations and leadership that we build look like the working class in all its diversity. Likewise, he opposed the jingoism and knee-jerk nationalism that separated U.S. workers from their strategic allies in other countries. He spoke out against the scapegoating of foreign workers for the decisions of transnational corporations and was a stalwart supporter of U.S. Labor Against the War.

While he was known for his tough bargaining fights, Jerry also understood the political world. In 1978 he was appointed to lead what many viewed as a hopeless effort to defeat a right-to-work referendum in Missouri. He constructed a campaign where workers reached out to farmers and small businesses and framed the issue as a “Main Street” fight against big business. The initiative was overwhelmingly defeated.

Until his illness prevented it, he was working closely with activists in Wisconsin to help unions recover from the assault on public workers, starting on the shop floor.

Since 2009, I have had the privilege of working with Jerry in the Labor Campaign for Single Payer Healthcare, which he co-founded. He saw the healthcare fight as the linchpin of an alternative worker-oriented political economy. Jerry served as unpaid staff to the organization and his leadership, contacts, and respect helped bring a broad group of leaders to the table. Throughout our deliberations, Jerry always advocated for the long view: building a grassroots movement strong enough to confront the massed corporate power at the core of the healthcare system. He stressed connecting our campaign to the fights against concessions at the bargaining table and urged against “inside the Beltway” thinking.

Jerry had an abiding belief in the ability of working people to make a better world for themselves. Despite all the defeats and disappointments, he never deviated from that touchstone. In his recorded remarks to last spring’s Labor Notes Conference he said, “I have an uncompromising faith in the rank and file’s capacity to respond when the truth is shared and a two-way flow of strategic and tactical options is offered the base.”

But he was no idle dreamer. He loved to quote his old civil rights buddy: “Remember, son, they be scheming while you be dreaming.” Whether it was a blockhead on the plant negotiating committee or the president of a national union, he refused to suffer fools gladly. Yet he had infinite patience and regard for anyone who wanted to stand and fight for workers.

Those who knew and loved Jerry were impressed by his warmth and his wide-ranging involvements, from jazz to baseball.

We live and fight today because of Jerry’s vision and leadership. The world will miss him.

Mark Dudzic is organizer of the Labor Campaign for Single Payer and a former local union president.

Jerry’s family, his wife Elaine and his daughters Tracy, Nicole, and Cynthia, ask that those who wish to contribute in Jerry’s name do so to the Labor Campaign for Single Payer. We encourage readers to comment here and to see the postings on the funeral chapel’s site.