It looks increasingly possible that lawmakers will reach a fiscal cliff deal that includes a hike in the Medicare eligibility age — a concession to those on the right who seem determined to see very deep entitlement cuts, even if they take benefits away from vulnerable seniors. One argument for raising the eligibility age is that seniors who lose benefits can get insurance through Medicaid or the Obamacare exchanges.

But a new report to be released later today undercuts that argument — and finds that up to half a million seniors could lose insurance if the eligibility age is raised.

The report, by the Center for American Progress, points out a key fact that’s been mostly missing from the debate: The hope of getting seniors who lose Medicare insured through Obamacare could be seriously compromised by the Supreme Court decision allowing states to opt out of the Medicaid expansion. This would inflate the number of seniors who could be left without insurance, because many would fall into the category of lower-income senior that would be expected to gain access to Medicaid through its expansion. (Jonathan Cohn has written about this extensively.)

Here’s how CAP reached its conclusion. The nonpartisan Congressional Budget Office recently concluded that a rise in the eligibility age could mean as many as 270,000 seniors are left uninsured in 2021. But that’s assuming Obamacare is fully implemented in all states. The CAP report points out that 10 states have publicly declared they will opt out of the Medicaid expansion, and more are undecided.

The CAP study then totaled up how many seniors below the poverty line live in states that may opt out of the Medicaid expansion, using 2011 data. The total: Over 164,000. This table shows how many of these seniors live in each of these states: 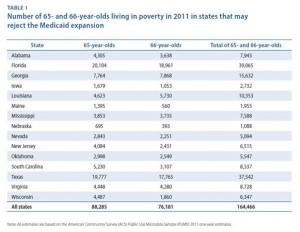 Add these to the aforementioned 270,000 seniors, and you get a total of approximately 435,000 seniors who could be left without insurance annually by 2021. And this is a conservative estimate — it’s based on 2011 data, and the population of seniors will grow significantly over the next decade.

Now, it’s very possible that many of these states will ultimately drop their bluster and implement the Medicare expansion. But Republican state lawmakers are also stalling in setting up the exchanges and resisting the law in other ways. With Obamacare implementation up in the air, it may be too risky to raise the eligibility age and hope Obamacare can pick up the slack.

“With opponents of the health care law still working to block it at every turn, many more seniors would become uninsured because they would have nowhere else to turn,” CAP’s president, Neera Tanden, tells me. “As a result this misguided proposal would undermine the promise of affordable health care for all.”

On top of this, the report finds, raising the eligibility age could also undermine a key goal of Obamacare by inflating medical costs and health care spending, for a range of reasons: Cost shifting, tampering with the health and age levels in insurance pools, and an increased reliance on private insurance, which isn’t as good as Medicare at controlling costs.

In my view, the speculation that Dems will ultimately agree to raising the eligibility age has been a bit overheated — it’s not clear this is definitely on the table. But it’s certainly possible. After all, some on the right seem determined not to accept any entitlement reform as “real” unless vulnerable beneficiaries are harmed, and Obama and many Dems prefer a deal to going over the cliff. So anyone who doesn’t want to see this happen should be making noise about it right about now. And there are a range of alternative ways to cut Medicare spending without harming beneficiaries.