By Eoin Reynolds for the Guardian – 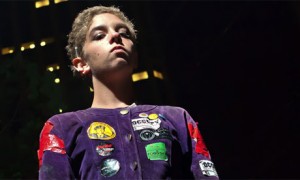 As Miran Istina puts it, she has been living on borrowed time since she was 14. Diagnosed with cancer, she was given just months to live after her health insurer refused to provide her with life-saving surgery.

Now 18, Istina, from the city of Sisters in Oregon, has spent the past three weeks living in a tent at the Occupy San Francisco protest and says she will stay there indefinitely, despite her illness.

She was inspired to take part in the protest by the refusal of her insurance company to pay for treatment for her chronic myelogenous leukaemia.

Treatment would require a bone marrow transplant and extensive radiation therapy and chemotherapy, at a cost of several hundreds of thousands of dollars. Coming from an ordinary middle-class background, her family has no way of paying for the surgery that would save her life.

Following her insurer’s refusal, she spent three years travelling the US looking for a healthcare provider who would give her a chance at life.

Istina said: “I went all over the place, looking for someone to give a damn, really, someone to care enough to treat me. Because we were middle class, we couldn’t afford to treat my disease. We’d be in debt for the rest of our family life.”

After repeated refusals to offer her treatment, she said: “I decided I was going to spend the rest of my life doing whatever my heart wants.”

The Occupy movement attracted Istina as she ties the corporate influence on American politics to the decision that has sentenced her to death.

She said: “The corporate influence on politics influences just about anything that happens, seeing as politicians write the plans that healthcare has to follow. It directly links the fact that insurers only pick and choose those who are actually worth it [financially]. I just happen to not be one of the ones they wanted to be around much longer.

“The decision was absolutely influenced by some corporation or some bank saying, ‘we can’t afford her. She’s not worth our money.’ In end terms, corporate greed is going to cost me my life.

“I used to be really upset about it. I’m not as much any more. I’m angry, for sure, but I think me being here might help it never happen again. That’s why I’m here. It’s that there are other people this is going to happen to if this movement doesn’t succeed and that’s not healthy. I’m done being the victim. However long I have left is dedicated heart and soul to this movement, no matter what it takes.”

She has immersed herself in the movement, becoming the chief media relations officer for Occupy SF and organising fundraising events around the city. On Thursday afternoon she led a CNN television crew on a walk through the camp, to show how they were living, explain their motives and refute claims that the living conditions are unsanitary.

She said of her new life: “My heart is finally satisfied.”

The Occupy San Francisco movement has seen up to 300 protesters take over the Justin Herman Plaza, at the Embarcadero in the downtown district since October 5.

The occupiers are given food by local restaurants and have received donations from supporters to provide supplies.

Health professionals from the San Francisco General Hospital are providing round-the-clock care for Istina, who needs strong pain killers and constant monitoring of her condition. Earlier in the month she suffered a kidney malfunction which required urgent hospital treatment.

Throughout the afternoon four police officers kept a watchful eye over the groups of tents and makeshift shelters but the atmosphere was relaxed. When the officers staged a walk-through some of the occupiers shared jokes with them. One said: “Please leave the automatic weapons outside the camp. This is a peaceful protest.”

Another said: “We’re not doing any harm. We’re just a bunch of peace-loving hippies.”

But a raid on the camp is possible at any time. San Francisco mayor Ed Lee has repeatedly insisted that the camp is illegal and all tents should be removed but so far little has been done to enforce the law.

He has threatened a raid and on Wednesday night occupiers expected police to move in, sparking a larger than normal demonstration. Two candidates for the upcoming mayoral election joined with the protesters but despite the presence nearby of riot police, the raid did not go ahead.