By Glenn Greenwald for the Guardian – 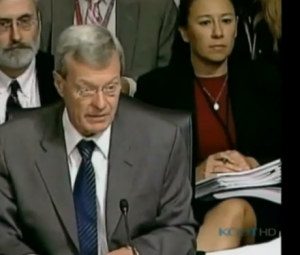 When the legislation that became known as “Obamacare” was first drafted, the key legislator was the Democratic Chairman of the Senate Finance Committee, Max Baucus, whose committee took the lead in drafting the legislation. As Baucus himself repeatedly boasted, the architect of that legislation was Elizabeth Folwer, his chief health policy counsel; indeed, as Marcy Wheeler discovered, it was Fowler who actually drafted it. As Politico put it at the time: “If you drew an organizational chart of major players in the Senate health care negotiations, Fowler would be the chief operating officer.”

What was most amazing about all of that was that, before joining Baucus’ office as the point person for the health care bill, Fowler was the Vice President for Public Policy and External Affairs (i.e. informal lobbying) at WellPoint, the nation’s largest health insurance provider (before going to WellPoint, as well as after, Folwer had worked as Baucus’ top health care aide). And when that health care bill was drafted, the person whom Fowler replaced as chief health counsel in Baucus’ office, Michelle Easton, was lobbying for WellPoint as a principal at Tarplin, Downs, and Young.

Whatever one’s views on Obamacare were and are: the bill’s mandate that everyone purchase the products of the private health insurance industry, unaccompanied by any public alternative, was a huge gift to that industry; as Wheeler wrote at the time: “to the extent that Liz Fowler is the author of this document, we might as well consider WellPoint its author as well.” Watch the five-minute Bill Moyers report from 2009, embedded below, on the key role played in all of this by Liz Fowler and the “revolving door” between the health insurance/lobbying industry and government officials at the time this bill was written and passed.

More amazingly still, when the Obama White House needed someone to oversee implementation of Obamacare after the bill passed, it chose . . . Liz Fowler. That the White House would put a former health insurance industry executive in charge of implementation of its new massive health care law was roundly condemned by good government groups as at least a violation of the “spirit” of governing ethics rules and even “gross”, but those objections were, of course, brushed aside by the White House. She then became Special Assistant to the President for Healthcare and Economic Policy at the National Economic Council.

Now, as Politico’s “Influence” column briefly noted on Tuesday, Fowler is once again passing through the deeply corrupting revolving door as she leaves the Obama administration to return to the loving and lucrative arms of the private health care industry:

The pharmaceutical giant that just hired Fowler actively supported the passage of Obamacare through its membership in the Pharmaceutical Researchers and Manufacturers of America (PhRMA) lobby. Indeed, PhRMA was one of the most aggressive supporters – and most lavish beneficiaries – of the health care bill drafted by Fowler. Mother Jones’ James Ridgeway proclaimed “Big Pharma” the “big winner” in the health care bill. And now, Fowler will receive ample rewards from that same industry as she peddles her influence in government and exploits her experience with its inner workings to work on that industry’s behalf, all of which has been made perfectly legal by the same insular, Versailles-like Washington culture that so lavishly benefits from all of this.

It’s difficult to find someone who embodies the sleazy, anti-democratic, corporatist revolving door that greases Washington as shamelessly and purely as Liz Fowler. One of the few competitors I can think of is Adm. Michael McConnell, who parlayed his military and intelligence career into a lucrative gig at Booz Allen, one of the nation’s largest private intelligence contractors; then became George W Bush’s Director of National Intelligence (where he spearheaded a huge gift to the telecom industry – retroactive immunity shielding it from all accountability for its participation in the illegal Bush NSA eavesdropping program – as well as continued his Booz Allen work of privatizing intelligence and surveillance functions); then returned to the loving arms of Booz Allen, where he now exploits his national security credentials on behalf of industry interests (by, for instance, spearheading the fear-mongering campaign about cyber-warfare in order to advocate for security programs that would amply enrich Booz Allen’s clients).

This is precisely the behavior which, quite rationally, makes the citizenry so jaded about Washington. It’s what ensures that the interests of the same permanent power factions are served regardless of election outcomes. It’s what makes a complete mockery out claims of democracy. And it’s what demonstrates that corporatism and oligarchy are the dominant forms of government in the US: