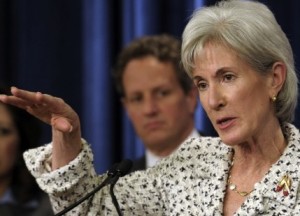 By Margot Sanger-Katz for NationalJournal –

In his convention speech in Charlotte, President Obama vowed to block the Republican Medicare reform plan because “no American should ever have to spend their golden years at the mercy of insurance companies.”

But back in Washington, his Health and Human Services Department is launching a pilot program that would shift up to 2 million of the poorest and most-vulnerable seniors out of the federal Medicare program and into private health insurance plans overseen by the states.

The administration has accepted applications from 18 states to participate in the program, which would give states money to purchase managed-care plans for people who are either disabled or poor enough to qualify for both Medicare and Medicaid. HHS approved the first state plan, one for Massachusetts, last month.

Obama’s 2010 health reform law allows experimentation in delivering health care at lower cost through demonstration projects. Many states would like permission to shift their entire population of so-called dual-eligible beneficiaries into the new plans. HHS has indicated that it will enroll about 2 million beneficiaries, out of about 7 million who qualify for full benefits from both government health programs.

California is already counting on more than $500 million in budget savings from its own program this year. Most states are proposing to automatically enroll people. Those who don’t want to participate would need to opt out. The Massachusetts plan includes that feature.

Potential cost savings are a big incentive for states. Patients who qualify for both federal health programs are a costly population and include many who need nursing-home care or other expensive services. About 40 percent of Medicaid’s costs go toward patients who are also eligible for Medicare. Advocates of the pilot program also say it could lead to better coordination of care for patients who often struggle to navigate the two different programs.

Still, there is powerful opposition to the pilots among doctors, hospitals, nursing homes, patient groups, and key lawmakers, including Sen. Jay Rockefeller, D-W.Va., who wrote the provision in the health law that created the office in charge of the pilot program.

“I urge you to take immediate steps to halt this initiative as currently structured and to take the time necessary to develop a well-designed and thoroughly evaluated care coordination model for dual eligibles that meets the standards outlined in the law,” Rockefeller wrote in a letter to HHS.

The Medicare Payment Advisory Commission, a group of experts who advise Congress on Medicare policy, has also weighed in with an 11-page letter to HHS, warning that the speed and scope of the program raised questions about whether patients would receive the care they need.

“Why are we taking the duals, who are entitled to Medicare benefits, and moving them into Medicaid?” asked Gottlieb, now a scholar at the American Enterprise Institute.

The Medicare reform plan championed by GOP presidential nominee Mitt Romney and his running mate, Rep. Paul Ryan of Wisconsin, would encourage more seniors to move into managed-care plans by giving them vouchers to purchase insurance. The idea is to create a marketplace that would compete with traditional Medicare for customers.

Obama has repeatedly warned that this approach would lead to the demise of traditional Medicare, one of the most popular government programs. He has also attacked Romney’s proposal to give states fixed sums to care for Medicaid patients, a change from the current system in which the federal government matches a portion of state spending.

But critics see irony in the administration’s support for the state pilot programs. “It does seem to move the dual-eligible population in kind of a different direction from where the energy seems to be,” said Patricia Nemore, a consultant to the Center for Medicare Advocacy, one of 33 consumer groups to sign a letter of concern to HHS.

Health and Human Services declined to comment for this story, but Melanie Bella, director of the Medicare-Medicaid Coordination Office at HHS, said in recent Senate testimony that the plan would be carefully overseen by her office and was designed to achieve cost savings while “improving health care delivery” and streamlining services.

Congress and past presidents have long wrestled with the effort to rein in the costs of dual-eligible patients. The Simpson-Bowles deficit commission recommended moving the entire population into managed-care plans for a 10-year budget savings of $12 billion.

The current pilot adopts a version of that model. To get approval, states must guarantee that both Medicare and Medicaid would save money. They must also agree to accept a fixed payment to cover all care for each patient. While rules say the private plans must cover all standard Medicare benefits, they also waive many Medicare rules and leave insurer selection to the states. The Massachusetts plan guarantees up-front savings that would grow from 1 percent in the first year to 4 percent in the third year.

People enrolled in private plans can switch back to traditional Medicare. But advocates worry this could be disruptive for the patients: Studies show that 58 percent suffer from “cognitive impairments.”

The managed-care industry is gearing up for the expansion. Three large insurers have purchased companies that insure Medicaid beneficiaries. For years, states have been moving Medicaid patients into managed-care plans, with mixed results. But this pilot represents a new market: It is the first large program that would pool Medicare and Medicaid benefits in a single, state-administered plan.

Some experts see opportunities to improve care by bringing both programs under one umbrella, but they caution that expectations of huge cost savings may be overly optimistic.

“The problem with this population is that all the strategies that the health plans have been used to using historically are going to backfire,” said Chris Duff, executive director of the Disability Practice Institute, an umbrella organization for small programs that provide coordinated care to dual-eligibles. He warned that slashing provider rates, limiting visits, and using other conventional cost-control measures could lead to expensive hospitalizations for frail dual-eligible patients.

But the states are enthusiastic about the pilot programs and believe they will be able to provide better care at lower cost.

Tennessee, which already contracts with managed-care companies for Medicaid services, has asked to move all 138,000 of its dual-eligibles into the new program. “These are states that are committed to serving this community better,” said Patti Killingsworth, chief of long-term care operations for the state’s Bureau of TennCare.