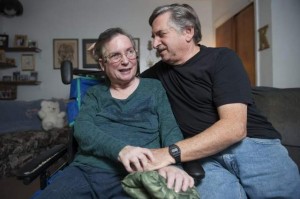 Since 2002, the Atco resident has fought with insurance companies, medical agencies and doctors after his wife, Kathy, 61, survived a brain tumor and later two debilitating strokes that left her partially paralyzed.

After their private insurance and savings were exhausted, the Pollocks needed Medicaid to pay for Kathy’s long-term care.

By now, Mike Pollock knows how to navigate health care’s web of red tape. Except for nearly six months spent in hospitals, rehabs and a nursing home, Kathy has been able to live at home in their apartment. That saves the state’s Medicaid program thousands of dollars annually.

But since 2011, when the state started contracting with managed care companies to handle Medicaid administration, Pollock has been spending more time on the phone, dealing with denials.

“It’s become more about the money,” said Pollock, who owns Atco Hardware Store. “When the state ran Medicaid, the people who ran Medicaid cared about doing their job. Now, you’ve got people worried about the bottom line.”

Though Kathy Pollock is covered under Medicare and Medicaid, her husband spends part of each day fighting for her medical care and supplies. Lately, he’s been arguing to have her physical and occupational therapy reinstated since it ended nearly three months ago. She has since regressed, he said, and can no longer feed herself.

Horizon NJ Health, the managed care company administering her Medicaid, also stopped providing the diapers he prefers, he said. His biggest fear is that Medicaid will cut into funding for Kathy’s beloved home health aides, who care for her while he works. He already fought a reduction in their $10-an-hour pay.

“It’s a distraction that I don’t need,” said Pollock, who wrote about previous bouts with managed care in his book, “From Death’s Door to Disney World: An Advocate’s Story.”

“If you talk to the people out there who are dealing with this on a daily basis, they’ll tell you there are people that are lost, who don’t know what to do. It’s a terrible situation.”

There are caregivers like Pollock across the state. Beverly Roberts, director of mainstreaming medical care for the Arc of New Jersey, hears complaints about cuts in the number of home health aide hours her clients are given each week. The nonprofit serves people with intellectual disabilities — patients who typically don’t improve.

“If anything, things get more difficult as the individuals get larger and heavier, and mom and dad get older and more frail,” said Roberts.

Advocates can file an appeal, she said.

They can also share their experiences publicly. New Jersey’s Medical Assistance Advisory Council allows the public to ask questions or comment on agenda items during its quarterly meetings. The council advises Valerie Harr, director of the state’s Division of Medical Assistance and Health Services. The next meeting is Nov. 22 in Ewing.

“It’s very upsetting when families are going through such difficulty,” said Roberts, who sits on the panel.

New Jersey is expanding its use of managed care companies to administer state-funded medical assistance. Studies have shown such arrangements modestly improve care and reduce costs, according to the Center for State Health Policy at Rutgers University.

But Pollock can’t imagine how. He wants a legislative remedy and a single-payer system like Medicare.

“It saves them tons of money by people being home, but they don’t care if Kathy doesn’t get the medical supplies that she needs,” Pollock said.

“It’s not about the patient. It’s about the money.”