‘There is a better health plan, Mr. President’ 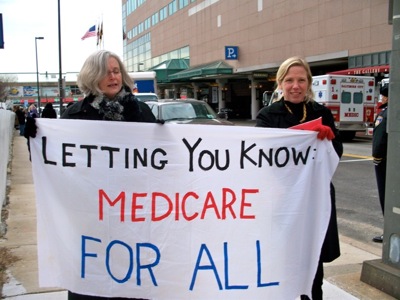 Rising to President Obama’s challenge in his State of the Union address that others come up with a better approach to health care reform than his own, two Maryland physicians who advocate for a single-payer program stood on the sidewalk this morning outside the Renaissance Baltimore Harborplace Hotel, where the president was meeting with House Republicans, and held a large banner reading, “Letting you know: Medicare for all.”

After refusing to move across the street, the two physicians were briefly taken into custody by law enforcement officials, issued a citation and then released.

One of the two was Dr. Margaret Flowers, a pediatrician and congressional fellow for Physicians for a National Health Program, an organization of 17,000 physicians who support a single-payer system, who is trying to deliver an open letter to the president calling on him to meet with her and other Medicare-for-All advocates.

Joining her was Dr. Carol Paris, a practicing psychiatrist and fellow PNHP member from southern Maryland.

In a letter to Obama, Flowers notes how surprised she and others were when single-payer advocates were excluded from the early stages of the discussions on health reform. She and Paris were two of several physicians, nurses and reform advocates who were arrested at Senate Finance Committee hearings last spring for standing up and asking why the Medicare-for-All option was “off the table.”

Flowers writes: “I am asking you to meet with me because the solution is simple. Remove all of the industries who profit off of the American health care catastrophe from the table. Replace them with those who are knowledgeable in designing health systems and who are without ties to the for-profit medical industries. And then allow them to design an improved Medicare-for-All national health system.”

Flowers then itemizes the advantages of adopting such a system, saying that it would cover everyone, save thousands of lives, relieve medical debt, control costs, help the economy, and restore the physician-patient relationship. Obama himself is on record noting only a single-payer plan would provide universal coverage: “The truth is unless you have what’s called a single-payer system in which everyone’s automatically covered, you’re probably not going to reach every single individual.”