Today in West Covina, the California Nurses Association summer 2012 Medicare for all bus tour will come to a close. After visiting 18 other California cities since June 19, the nurses will wrap up this run with a bang and with clarity. Three of the subjects of Michael Moore’s 2007 documentary film SiCKO will be on hand to help lead others in sharing their stories of struggle and frustration with the broken healthcare system. 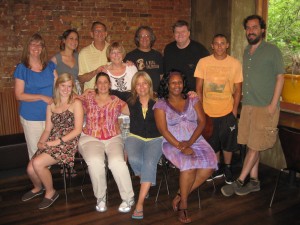 9/11 first responder Reggie Cervantes and Dawnelle Keys, the mother whose toddler died because she was denied treatment at an out-of-network hospital, will join me at this final stop where the nurses will perform health screenings from 3 – 6 p.m. and then we’ll have a town hall meeting from 6:30 – 8 p.m. My husband and I lost everything we had worked a lifetime to achieve when we got sick even though we always carried health insurance.

Five years ago, when SiCKO was released, the nurses of CNA went to Sacramento with Michael Moore to call attention to the pain Californians were needlessly suffering at the hands of the dysfunctional system. On this fifth anniversary of the film’s release, this West Covina reunion of some of the American SICKOs will help highlight how far we have yet to go and what these women have to say about the current healthcare law – the Affordable Care Act – just upheld by the Supreme Court and the subject of so much political gamesmanship. These SiCKO patients will share what it means to real people, real Californians. And that’s what this tour has been all about.

Don’t come planning to sit unengaged through a lengthy program. Come ready to become a part of what moves California and the nation to a place where there are no more SiCKOs like me or Reggie or Dawnelle. See you in West Covina. And don’t think because this tour is almost a wrap that the nurses are finished. They won’t be done until every patient is treated under a system that includes a single standard of high quality care for all – a guaranteed, improved Medicare for all system.