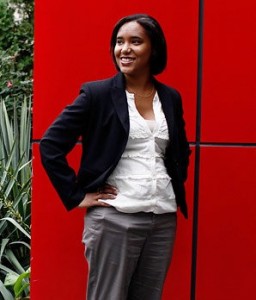 Jennifer M. Ng’andu, a health policy specialist at the National Council of La Raza is dismayed at the White House’s decision on health care.

By Robert Pear for the New York Times –

The White House has ruled that young immigrants who will be allowed to stay in the United States as part of a new federal policy will not be eligible for health insurance coverage under President Obama’s health care overhaul.

The decision — disclosed last month, to little notice — has infuriated many advocates for Hispanic Americans and immigrants. They say the restrictions are at odds with Mr. Obama’s recent praise of the young immigrants.

In June, the president announced that hundreds of thousands of illegal immigrants who came to the United States as children, attended school here and met other requirements would be allowed to remain in the country without fear of deportation.

Immigrants granted such relief would ordinarily meet the definition of “lawfully present” residents, making them eligible for government subsidies to buy private insurance, a central part of the new health care law. But the administration issued a rule in late August that specifically excluded the young immigrants from the definition of “lawfully present.”

At the same time, in a letter to state health officials, the administration said that young immigrants granted a reprieve from deportation “shall not be eligible” for Medicaid or the Children’s Health Insurance Program. Administration officials said they viewed the immigration initiative and health coverage as separate matters.

Kathleen Sebelius, the secretary of health and human services, said in the Federal Register that the reasons offered for the immigration initiative “do not pertain to eligibility for Medicaid,” the children’s health program or federal subsidies for buying private health insurance.

Nick Papas, a White House spokesman, said the deferred-deportation policy “was never intended” to confer eligibility for federal health benefits. The White House describes that policy as “an exercise of prosecutorial discretion,” allowing law enforcement officers to focus on immigrants who pose a threat to national security or public safety. Administration officials declined to elaborate as to why beneficiaries of the new immigration policy were ineligible for coverage under the new health law.

The move might help Mr. Obama avoid a heated political debate over whether the health law is benefiting illegal immigrants. The possibility of such benefits has drawn criticism from many Republicans, including Representative Joe Wilson of South Carolina, who shouted “You lie!” as Mr. Obama addressed the issue before a joint session of Congress in 2009.

The restrictions on health coverage may also save money by limiting the number of people who receive health insurance wholly or partly from the federal government. Federal subsidies for insurance under the new health care law are expected to average $5,300 a year for each person subsidized in 2014, and the cost is expected to rise to $7,500 a person in 2022, the Congressional Budget Office says.

Several immigration lawyers and health policy experts have criticized the restrictions, saying they will make it more difficult to achieve the goals of the health law and the immigration initiative, which Democrats consider two of Mr. Obama’s most significant achievements.

Jennifer M. Ng’andu, a health policy specialist at the National Council of La Raza, a Hispanic rights group, said: “We do not understand why the administration decided to do this. It’s providing immigration relief to children and young adults so they can be fully integrated into society. At the same time, it’s shutting them out of the health care system so they cannot become productive members of society.”

Ricardo E. Campos, 23, of Wheaton, Md., an illegal immigrant who came to the United States from El Salvador at the age of 12, applied for the deferred-enforcement program two weeks ago with help from a community organization, Casa de Maryland.

He is attending a community college and said he desperately needs affordable health insurance. After doctors discovered that he had bone cancer, he underwent a 36-hour operation in 2009 and was in a wheelchair for a year.

“I want to become a doctor, in internal medicine or oncology, so I can save lives just as my life was saved,” Mr. Campos said.

“What if one day the cancer comes back and I don’t have health insurance? That’s scary.” (Just before his surgery, Mr. Campos got coverage through a state-sponsored plan with high premiums, after commercial insurers had turned him down.)

Under the new federal health law, insurance subsidies are available not only to citizens, but also to low-income immigrants “lawfully present” in the United States. That group will still include green card holders and people granted asylum.

The Pew Research Center estimates that up to 1.7 million unauthorized immigrants could eventually seek deferrals of deportation under the exercise of executive authority announced in June by Mr. Obama. Those immigrants will continue to be able to receive health insurance from employers, but many are likely to struggle to obtain coverage if they do not have a job that provides it.

In the absence of a significant change in immigration law, young immigrants granted temporary relief from deportation have no clear path to green cards or citizenship.

When he announced the new immigration policy in June, Mr. Obama hailed the patriotism and promise of young “dreamers” — illegal immigrants who could have gained legal status under a bill known as the Dream Act, which has been bottled up in Congress for 11 years. Mr. Obama said the young immigrants were Americans at heart and should be able to work legally and live openly in this country without fear of being expelled.

Marielena Hincapié, the executive director of the National Immigration Law Center, an advocacy group for low-income immigrants, said: “We had been working closely with the administration, so we were quite surprised and shocked by the new restrictions on health coverage. This is a shortsighted, reactionary and bad public policy.”

Republicans in Congress have criticized the deportation deferrals as a form of backdoor amnesty for immigrants who broke the law by entering the United States illegally or by overstaying visas. They say Mr. Obama does not have the legal authority to do what he did — a claim also made in a lawsuit by 10 immigration law enforcement officers who are challenging the policy in Federal District Court.

The politics of the issue cut in several directions. The Gallup tracking poll shows Mr. Obama with a wide lead over his Republican opponent, Mitt Romney, among Hispanic voters. At the same time, administration officials have tried to avoid alienating swing voters who are concerned about illegal immigration, and they have emphasized steps taken to secure the borders.

In the primary campaign, Mr. Romney said he would veto the Dream Act because it could create a magnet for illegal immigration. Ryan M. Williams, a spokesman for Mr. Romney, said Mr. Obama’s deferred-deportation policy had “ruined an effort in Congress to forge a bipartisan long-term solution” for illegal immigrants brought here as children.

Some immigrants and their allies worry that the restrictions on federal health benefits could be used to justify similar actions by state officials. Gov. Jan Brewer of Arizona, a Republican, has issued an executive order denying driver’s licenses and public benefits to young immigrants who are granted relief from deportation.