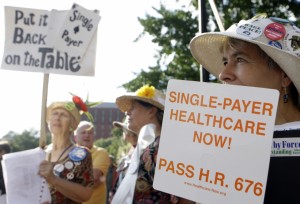 Supporters of a single payer health system rally outside the White House.

History proves the power of grassroots movements funded by people like you is the only way to win against corporate greed. We need you to continue to support Healthcare-NOW! so we can end our healthcare crisis.

You can make a tax-deductible donation online, or mail a check (made out to IFCO/Healthcare-NOW!) to Healthcare-NOW!, 1315 Spruce Street, Philadelphia, PA 19107.

Recent actions show we can make an impact.

10,000 supporters emailed and called Congress demanding that they NOT cut Medicare, Medicaid, and Social Security. Pres. Obama was willing to raise Medicare’s eligibility age to 67, but it looks like public pressure has him backing off that position.

Activists organized dozens of rallies and actions all over the country on International Human Rights Day in December and on Medicare’s 47th Anniversary in July.

16,000 supporters sent messages to every governor demanding they expand Medicaid in their states. Health Care for All – Texas members joined a large rally and hand delivered this petition to Gov. Perry’s office.

We helped launch the Divestment Campaign for Healthcare. Our goal is to have “socially responsible investment” funds and universities divest from for-profit health insurance corporations.

We helped organize the One Payer States conference in June for activists working on state single-payer legislation.

We helped organize the 5-year reunion of those featured in Michael Moore’s documentary SiCKO. Michael and many of the subjects in the film spoke to a packed theatre.

150 activists participated in our National Strategy Conference held in Houston, TX in January.

Now we’re planning our National Strategy Conference, to be held in April, in Chicago where our advocates will develop campaigns to challenge corporate power and build the movement for single-payer, national healthcare.

With your support the grassroots movement to end the healthcare crisis in the United States will continue to grow and win.

Our budget is relatively small, but we have to raise at least $10,000 every month just to make payroll and meet operating expenses. Corporations, foundations, and mainstream liberal organizations won’t fund our work because we challenge the status-quo. So we need people like you to give what you can if we want to keep our national network of activists going and growing.