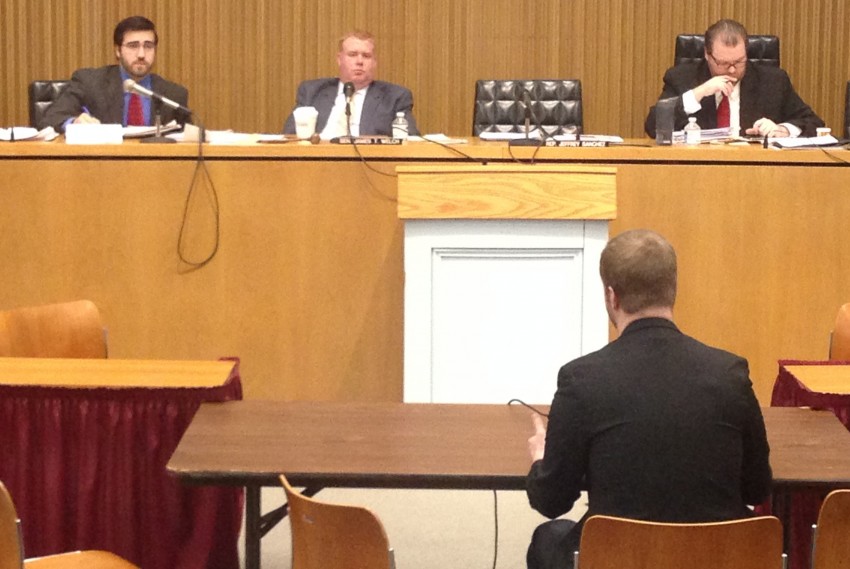 Chairs and Members of the Joint Committee on Health Care Financing,

I first got involved with the single-payer movement over 10 years ago when I got a $5,000 hospital bill at a time when I was earning less than $15,000 per year. I had health insurance, but my insurer – Aetna – claimed that I should have been treated on an outpatient basis and refused to cover the cost of an inpatient stay AFTER I was admitted to the hospital. I was just following my doctors’ advice – I certainly didn’t admit myself to the hospital – and so I ended up joining the millions of patients who are lucky enough to have coverage and who are acting as responsibly as we can, and yet STILL face the prospect of financial ruin at the hands of our healthcare system.

Right now there’s a national debate raging over single-payer healthcare; it’s not a debate about legislation in Congress – it’s a debate over the future and the soul of the Democratic Party, and there’s a parallel struggle going on within the Republican Party. As of this December, 81% of Democrats nationally support single-payer or “Medicare for All”; 60% of independents support it; and even 30% of Republicans (Kaiser Health Tracking Poll, December 2015). The support in Massachusetts is doubtless much higher, as evidenced by the more than 24 local non-binding ballot initiatives for single-payer that have all passed, even in districts electing Republican legislators.

There is no academic debate over whether we should be moving towards a single-payer healthcare system – defenses of market-based health insurance have fallen into the same category as climate-change deniers and flat-earth advocates. Markets cannot efficiently or equitably provide healthcare coverage – this has been proven by every international study, all the data, and even in economic theory. Honestly, it’s the reason why these hearings on single-payer bills can get a bit dull and one-sided.

And yet, despite an academic consensus, practically universal support among Democrats, and a strong majority of support from the whole population, single-payer has only modest support in most state legislatures, and even less than that in Congress. So we have a democracy gap, we have a gap between our policy and our politics, and a gap between the values and the actions of Democratic legislatures.

I think we’re all aware of what’s causing these gaps: money. And I don’t mean conspiratorial campaign donations, I mean the money that passes through the healthcare system, and the large changes that single-payer reform would make to who pays for healthcare and who makes money on the other end.

If your political philosophy is to bring all of the major stakeholders to one table, and develop a compromise that makes everyone equally unhappy, you will never end up at single-payer. You’ll also never end up with any sustainable solution that brings our healthcare costs under control or that provides guaranteed access and financial security for patients.

Massachusetts, along with the rest of the country, gained a brief reprieve from rapidly rising healthcare costs as high deductible plans and narrow networks became pervasive, and led patients to use less care. We had a similar, brief slow-down in healthcare costs when managed care was first introduced in the 1990s. Beyond being horrible for patients, these are not sustainable ways to control costs – the honeymoon is already over if you’ve been following our cost trends.

We have a healthcare system that essentially punishes moral legislation: The more you agree to cover necessary healthcare – by patching up the cracks patients can fall through, by holding insurers accountable – the more it costs us as a society. Those healthcare costs eat away at all of the other functions of government, undermine businesses’ competitiveness, and edge out other basic human needs in household budgets.

Here in Massachusetts, we have possibly a greater moral commitment to healthcare access than any other state, but we’re paying the price for it: many years we have the highest premiums in the country; healthcare costs now make up about half of the state budget, and are edging out the state’s spending on education and local aid; the same costs are decimating municipal budgets, including public health spending that prevents people from getting sick in the first place. So doing the right thing in healthcare, more than anything else, undermines our ability to do the right thing in education, housing, public transportation, and the environment. This is only so if we refuse to change our healthcare financing system.

There is nowhere in the world where healthcare costs have been controlled OR where healthcare is protected as a right, without a single-payer system or something very close to it. We keep trying here in the U.S., because that is the inevitable result of crafting health reform around a table where all the stakeholders in the healthcare industry have a seat.

As difficult as it might be, we need a new politics for healthcare reform: we need a table where the only people with a seat are those whose lives are at risk, not those whose profits are at risk; a table that represents Massachusetts residents, not one seat for residents and five seats for each arm of the healthcare industry.

In the 1960s the American Medical Association opposed the passage of Medicare and Medicaid. They were on the wrong side of history, and in retrospect their opposition seems parochial and indefensible. Medicare is indispensable for seniors today, and none of the fear-mongering or ominous predictions leading up to its passage came to pass. We will look back on Medicare-for-All in the U.S. the same way. Massachusetts has an opportunity to be on the right side of history for all the same reasons. But the first step on that longer road is favorably reporting these bills out of committee – so thank you for your careful consideration!