Some See Their Compensation Double

Chief executive officers at Fortune 500 health insurance companies, who have opposed new regulations under the Affordable Care Act, emerged this month as one of the ACA’s greatest beneficiaries. Recently filed financial reports show that average compensation for these top nine health insurance CEOs rose by more than 19 percent in 2013, while several of the nation’s largest insurers more than doubled CEO pay. 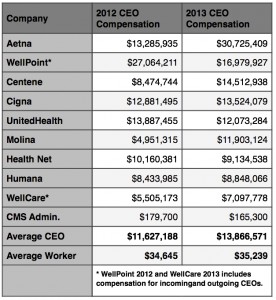 The biggest winner was Aetna CEO Mark Bertolini, who received a staggering $30.7 million compensation package in 2013. This marks the largest payout to any health insurance executive since passage of the ACA and exceeded the compensation of the next two highest paid health insurer CEOs combined. The Bertolini pay package, which included a large “special one-time performance-based retention award,” represented a 131 percent increase over his $13.3 million compensation in 2012.

The disclosures of higher CEO pay coincided with several of the same companies announcing better-than-expected earnings in the first quarter of 2014, even as they signaled that patients and businesses should prepare for increased insurance premiums in 2015.

“For far too long, private health insurance executives have received outsized compensation packages – subsidized by the ever-increasing premiums of hardworking Americans – while millions of low income individuals and those with pre-existing conditions went uninsured,” says Representative John Conyers, Jr. (D-Mich.). “The United States’ healthcare sector has been in need of repair for decades, and over-the-top executive compensation is emblematic of the failure of our private health insurance system. While the Affordable Care Act is a good first step, truly universal coverage and meaningful reform to our healthcare system can be provided only through a single- payer system. I have introduced H.R. 676 – the Expanded and Improved Medicare for All Act – since 2003 to live up to this aim of universal care and establish health insurance as a basic right rather than a for-profit industry,” he continued.

“Families and patients are being asked to tighten their belts in the face of rising healthcare costs, while our premiums are being used to subsidize even more astronomical compensation for the already wealthy,” said Benjamin Day, Director of Organizing at Healthcare-NOW!, a nonprofit group that advocates for a single-payer system, sometimes called “an improved Medicare for all.”

“In contrast, the top administrator of Medicare – our public, universal health plan for all seniors, which is more efficient, provides better financial protection, and receives higher marks from patients than private health insurers – is paid less than $200,000 per year. The culture of excess at these for-profit corporations is incompatible with the goals of an efficient, ethical health care system, where every dollar diverted from patient care represents a loss of access for real families.”

Day continued: “We face the highest healthcare costs and have among the worst health outcomes of any country in the developed world because we allow private health insurers and dozens of other intermediaries to act as for-profit middlemen in the health care system. Although many backers of the Affordable Care Act said it would rein in insurance company excesses, the law clearly hasn’t curtailed top executive pay.”

“Thirty-million-dollar CEO paychecks – millions that should be spent on saving lives, not making the rich richer – should be a stark reminder that a single-payer, Medicare-for-All program would lower costs by spending every available dollar on patient care, and making access to care an inalienable right for everyone in the United States,” Day said.