Five protesters were arrested this morning at a Senate hearing on health-care reform. The protesters — some, who identified themselves as doctors and nurses — were be charged with “Disruption of Congress,” according to the Capitol Police spokeswoman. The Senate Finance Committee hearing was a roundtable discussion between senators and experts on the best way to pay for health-care reform. 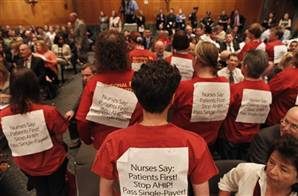 As the hearing opened, about 25 women, who identified themselves as nurses stood up, turning their backs to the senators. Taped to each of their red shirts were signs that called on Congress to pass what’s called a “single-payer system,” a system in which the government alone would run health care — no private insurance.

After standing silently for about five minutes, the nurses walked out of the hearing in an orderly fashion. They were not escorted by police. But shortly after the group left the hearing, more vocal individual protest began. A person stood up and in a screaming or loud voice, called for Congress to pass the single-payer system.

Within a minute or so, a police officer escorted the protester out of the room and arrested them in the hallway. This sequence was repeated four more times, ending with the arrest of each individual.