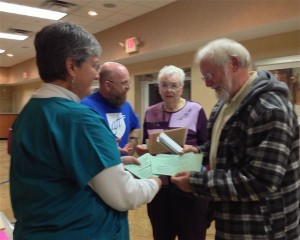 Spokesperson Lynn Yellott described improved Medicare for all as a “system where healthcare dollars go to healthcare, not to private insurance companies. With expanded and improved Medicare for all,” she continued, “we would be able to choose any doctor, rather than be restricted by insurance company networks. We would not have insurance companies interfering with treatment. By providing preventive care, by reducing unnecessary paperwork and bureaucracy and by eliminating insurance company expenditures on high salaries for executives, campaign contributions, lobbying and marketing, we could save enough to provide medically necessary care to all in our country without increasing costs.”

EPSPAN member Steven Cotterill, whose wife is a teacher and whose family has insurance purchased through PEIA, testified at the hearing. He waved the thick stack of bills generated by his daughter’s illness which required “out-of-network” treatment. He explained that if his daughter had become ill in his country of birth, England, she would have received excellent care with no out-of-pocket expenses.

EPSPAN is a chapter of Physicians for a National Health Program and Healthcare-Now! Recently, to highlight the amount of money local jurisdictions could save if improved Medicare for all were enacted, EPSPAN analyzed the healthcare-related items in the Jefferson County schools budget. The study revealed that the school system could have saved more than $2.5 million dollars in 2010 had the country adopted improved Medicare for all.