Major players from the American Medical Assocation, the American Hospital Assocation, and of course the insurance lobby were present today at the first of several House and Senate hearings on the Anthem-Cigna and Aetna-Humana mergers. Unfortunately, no one was there to speak on behalf of you and me, the patients.

That’s why we created this petition: to ask Attorney General Loretta Lynch to oppose these mega mergers and instead support a single payer healthcare plan for all. 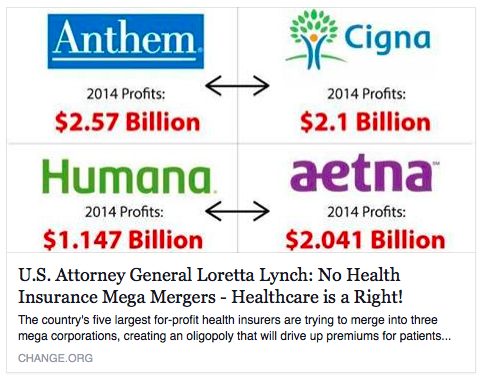 Check out our petition graphic above to see how much these massive insurers made last year by witholding care to patients. But it’s still not enough for them.

Sharing the petition is important because it helps educate your network that these mergers are happening and that they can do something about it. You can Facebook the petition or Tweet the petition after you’ve signed!