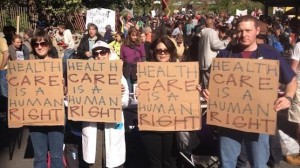 President Obama’s 2015 budget proposal would “involuntarily disenroll” some (fewer than 5,000) undocumented immigrants currently receiving some Medicare benefits–even those who have been paying into Medicare for decades–in order to realize minimal savings that will be offset by the costs to hospitals for treating the elderly uninsured.

Tell President Obama that his proposal to cut immigrant Medicare benefits is unfair, heartless, and unnecessary.

It’s unfair. Immigrants–mostly undocumented–contributed $13.8 billion dollars more into Medicare than they received in benefits in 2009, while US-born people generated a $30.9 billion deficit. Immigrants have actually been subsidizing and keeping the Medicare program afloat for US-born residents for decades, and they deserve better not worse coverage than they currently receive for their contributions.

It’s heartless. In order to save only $13 million a year (.0003% of his $3.9 trillion budget) President Obama is willing to put thousands of people’s lives at risk. Imagine losing your health insurance in an instant. How would you pay for your medication or doctor visits? The emergency room will replace the doctor’s office and this could cost us more than it saves.

It’s unnecessary. A national, single-payer healthcare plan, like HR 676, would cover everyone living in the US and save $500 billion a year on healthcare costs. Covering everyone who works and lives here should be our goal–not cutting benefits from hard-working individuals who put more into the system than they take out.

Tell President Obama: “Don’t cut undocumented immigrants’ Medicare coverage. It’s unfair, heartless, and unnecessary. Preserve their right to healthcare and work towards a single-payer healthcare system that would cover everyone living in the US instead.”