Philadelphia – 13 students and citizens angered by our broken healthcare system, which leaves 47 million uninsured, is part of 60% of all bankruptcies, and causes about 45,000 avoidable deaths each year, were arrested at the Independence Blue Cross offices in Philadelphia on October 30, 2009.

The 13 participants approached one of the entrances to the building, where security and officials had blocked all non-employee traffic, and demanded a meeting with Independence Blue Cross CEO Joseph Frick in order to present a letter listing their grievances and demands:

Independence Blue Cross 1) must agree to cover all doctor-prescribed, life-saving care for their members and 2) must discontinue all campaign contributions and funding of anti-health reform lobbying campaigns aimed at preserving the failed employment-based healthcare system and 3) publicly pledge support for a single-payer system. 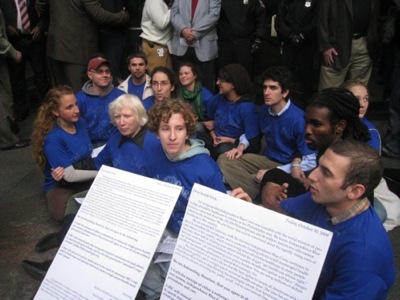 The demonstrators refused to leave until their demands were met. When they were denied a meeting with Mr. Frick or another high-ranking official, the 13 demonstrators sat down and refused to move from their position in front of the side entrance. The participants were then promptly arrested.

They were backed by a large crowd of supporters rallying outside of the building in support of a single-payer healthcare system.

The majority of those arrested were undergraduate students with the Student Healthcare Action Network (SHAN) at Swarthmore College. “We as students are standing with other concerned citizens and demanding an affordable system that covers everyone, young and old alike” says Dani Noble, a Swarthmore sophomore arrested on Friday. “As future leaders, we need to step up and protest the inefficient healthcare system that is bankrupting us and our country.”

“Independence Blue Cross, despite being a ‘non-profit,’ continues to act like their corrupt for-profit counterparts,” says Jeff Muckensturm. “They play the middle-man in our healthcare by denying doctor-prescribed care, they pay their CEO a multi-million dollar salary, and they’re active in a lobbying campaign called GetHealthReformRight.org that aims to block any health reform by spreading misinformation.”

“Real healthcare for the public good is Medicare for All, a single-payer system,” says Markus Schlotterbeck, a Swarthmore senior also arrested. “Independence Blue Cross has failed in its original goals of ‘serving the public good.'”

Learn more about the Student Healthcare Action Network at www.studenthealthcareaction.org.