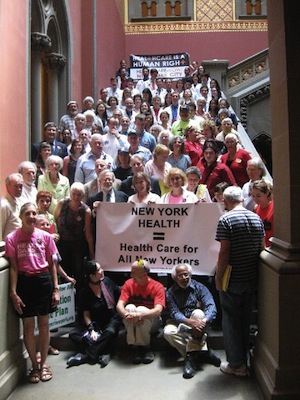 “These signatures are a testament to the dedication of New Yorker all across this great state to reach out to members of their communities and help build the grassroots movement it will take to make healthcare a human right in New York,” said Katie Robbins, an organizer with Healthcare-Now.

The New York Health bill (A.5389-a/S.2078-a) —”an act to amend the public health law and the state finance law”— would expand health coverage to all New Yorkers regardless of age, income, or employment status, and would control costs by implementing a single-payer, universal healthcare system, its supporters say.

The bill has 74 co-sponsors in Assembly and 17 in the Senate.

“The affordable care act has made some important improvements in how we organize and pay for health care in this country but it still leaves us and our health care, and our wallets, in the hands of insurance companies—with their premiums, and their administrative costs, and deductibles, and co-pays, and limited network, and denials of payment for the care we need. We can do better and New York can do better,” said Gottfried, chair of the Assembly Health Committee.

“President Obama during [his] campaign said that no American should have to spend their golden years at the mercy of insurance companies, and I agree with that, but I want to know why that is only for golden years. We can get better health care, more affordable health care, more fairly paid for, for every single New Yorker if we enact the New York Health bill to provide universal, publicly sponsored, publicly funded, single-payer health coverage. We want to get this bill to the floor of the Assembly this year for a vote,” he said.

Under the legislation, there would be no premiums, co-payments, or deductibles, and coverage would be publicly funded. Advocates said they would like to see the bill passed in the Assembly, in the Senate, and signed by the governor.

Perkins began his speech with a call and response of “you’re heath is your wealth.”

“When Massachusetts enacted their insurance mandate, many low-income residents found they had less access to health care services. It is immoral that the rich country in the world still refuses to treat health care as a basic human right, even while we spend far more money on health care per capita than countries with universal access,” Dunlea said.